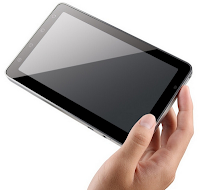 Back on June 27 I blogged about the Google Nexus 7, the latest entry in the 7" tablet space. The Nexus 7 looks very interesting, but probably won't be the big news for long. Apple clearly owns the larger tablet space for now, but dominance in the smaller tablet space may still be up for grabs and new models are probably coming soon.


Some early models of the smaller form-factor tablet, such as the Blackberry Playbook, were failures while others such as the Kindle Fire and B&N Nook have been successes. The rumors are now heating up about a next generation of 7" Amazon tablets to compete with the new Nexus 7. Most rumors suggest an updated low-end model without a camera, and a higher-end model with a camera and higher resolution display. One or both models are rumored to have 4G carrier network  capabilities. What else might we see? Will any of these new tablets have NFC (Near Field Communications) hardware for payment or access functions?


One possible addition to this product space is an Apple iPad Mini. There has been lots of speculation. On the one hand, Apple doesn't need to dilute their product line as long as their iPad continues to sell so well. But on the other hand, releasing an Apple branded 7" tablet right now could take all the attention (and most of the sales) away from Google and Amazon.


I think it's likely we'll see a crowded 7" tablet market in the second half of 2012, with most or all models in the $200-$250 US price range, and that they'll be very big sellers through the holiday season.

Thanks for reading! Blogs work best with active participation. If you enjoy this blog, please give it a +1 and leave a comment. Share it on Twitter, Google+ or Facebook. More readers will drive more discussion.
Posted by Deke Kassabian at 6:06 AM