Plenty of Red Snapper and Rockfish on a beautiful fall day

Whenever I travel near the coasts, whether for business or pleasure, I look for an opportunity to go fishing. Back in late October I attended a great higher education Information Technology conference in the Los Angeles area. Thousands attended. When the conference ended mid-day on Friday, my colleagues all headed to the airport to fly back home, but I picked up a rental car and drove southwest to Newport Beach. As an avid fisherman who has fished more on the east coast, I was hoping to do some west coast fishing.

The area where I wanted to fish, Catalina Island, has a great range of fish including Red Snapper, California Sheephead, Bonito, Tuna, and many kinds of Rockfish. What really had my attention, though, was that this area can sometimes be a great place to fish for Yellowtail, a kind of colorful amberjack that is often featured in sushi restaurants.

I headed down to the docks on Friday afternoon, found the Newport Landing Fishing Company, and confirmed a 12-hour trip for Saturday morning with a 5:30am boarding time and a 6am start. I was told that only 19 fisherman were booked on a boat that can accommodate up to 40 fishermen. This was called a “limited load all-day” trip, meaning there would be plenty of room to fish and enough time to have a good shot at good fish.

Though the Newport area had plenty of great restaurants and nightlife, I got to bed early on Friday evening to be rested up for an early start. I woke up at 4:30am, dressed in layers, and headed down to the docks to check in at the fishing station where I bought my one-day fishing license, rented a 7-foot rod with a big spinning reel, and got some fishing tackle for the trip. Next, I bought a cup of coffee and started chatting with two other fishermen waiting to board, Kyle and James, who were both in their mid-30s. I later found out that James was getting married in a week or two and this was part of Kyle’s bachelor party gift to him. That’s a good friend! The three of us ended up hanging out together for the day.

The Patriot, our boat, was an older boat and not very fast. It had three mates, Mike, Matt and Jake, and a captain (whose name I never caught). Overall there were 19 fishermen and 4 crew ready for a day of fishing on the Patriot. As it happens, there was not one woman aboard. Fishing can sometimes be like that.

We shoved off and motored out past the moored boats and waterfront properties on both sides. We made a quick stop at the floating bait barge near the mouth of the inlet for a big supply of live sardines. It was barely 6am and the sky was still dark, but I could see and hear the sea lions breaking the surface near the boat and gobbling up any stray sardines that fell from the net and didn’t make it into the bait well. Loaded down with bait, we started the long trip out to Catalina Island. Every fishermen threw a $5 bill into the winner-take-all jackpot for the heaviest fish at the end of the day, and most of us ordered breakfast. There was plenty of time during the two and half hour ride to watch the sun rise, to sleep a bit, to sit up at the bow and look for dolphin, to hang out at the stern and watch the sea birds chase us, and to eat a breakfast burrito cooked by the head mate, Mike. As the sun came up and Catalina Island started to come into view, we got our tackle rigged up and staked out our spots at the rail. Kyle, James and I picked out a big section of the starboard side stern right near the bait. Fishing at the stern is considered lucky by lots of fishermen. Whether lucky or not, I know the distance from the water to the rail is shortest in the stern, which means you can get your fish into the boat faster and more reliably. 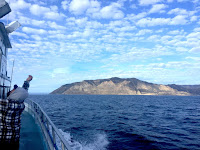 I took some photos of Catalina Island in the morning sunlight and watched the dolphins swim close by. The boat settled into our first fishing spot and we baited up and let the lines go down. 200 feet of water! That means even cranking up to check on your bait is hard work, let alone reeling in a fish.

It was a relatively calm day, with the sun peaking out behind some high clouds. Good visibility and plenty to see. As we fished we saw dolphins, sea lions, and lots of sea birds including cormorants which swim under water to go fishing. At one point we saw a marlin resting at the surface before slipping back down into deeper water. A little later, a small mako shark swam alongside the boat looking for a free meal. One of the mates actually tried (unsuccessfully) to gaff him! 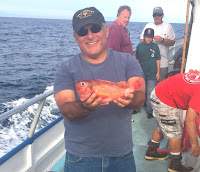 The day wore on and it was clear that there would be no real opportunity for Yellowtail, but that didn’t matter. It had been a beautiful day out on the water, with plenty of action. We caught lots of Rockfish, Red Snapper, White Seabass, Sheephead, and even a few flatfish. None of the fish were huge on this day, but we appreciated catching every one them. My arms were tired by the end of the day! We pulled up lines for the last time at around 4pm, and secured our fishing rods, grabbed some cold beers from the galley for the long ride home and started to check the catch to see who would take home the jackpot. In the end, one of the larger Sheephead was the winner and we congratulated the guy who caught it.

As we rode home, the mates cleaned and filleted fish for us for tips. I had my fish cleaned and kept just enough for dinner (about a pound of Red Snapper filets) and gave the rest to Kyle and James. They told me that these fish would be on the menu for a big barbeque the next day as the celebration for James' pending nuptials continued. I was glad I could add something small to the festivities. I tipped the mates well and bought a round of beers for Kyle, James and myself.

We motored in closer to 7pm, and the skies had already grown dark again. The houses and docks were lit up beautifully. We pulled in at the docks and, grabbing our bags of fresh fish, headed our separate ways. I wished Kyle and James well and, on advice from one of the mates, took my fresh Red Snapper fish filets to a local restaurant that was happy to cook them for me. A delicious end to a great day out on the water.

When I travel, a day of fishing will always be on the menu when possible. For me, it's therapy. It reminds me of days fishing with my father and grandfather and it makes me happy knowing that I've passed on my love for the water and sea life to my sons.