(I promised to cover a few items getting buzz at the Consumer Electronics Show held last week in Las Vegas. This piece is the third in that series) 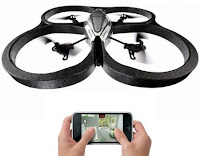 The Parrot AR Drone is a remote control flying copter-device with four rotors (a "quadricopter") positioned in a 2x2 grid. It's flight can be controlled from Apple iOS devices such as the iPad, and now Android devices, and the flight software takes advantage of touch and tilt elements of the interface. The AR name stands for Augmented Reality, which I'll describe in a moment.


The AR Drone was shown off at CES this year, as it was each of the last two years. But this year Parrot was showing off a significant upgrade. This newest model, the AR.Drone 2.0, has a 1280×720 pixel forward-facing main camera that shows the view that a pilot would have in flight. It also has a 320×240 pixel downward-facing camera in its underbelly, which is used to view the ground for feedback used in flight and in landing. The main camera can record that view of a flight, which suggests some fun possibilities such as chasing your friends around the backyard, spying on your little sister and her friends, looking into the neighbors windows, etc. – though I'm sure the good people at Parrot had none of those uses in mind when they developed the device. Instead, they had Augmented Reality in mind.


The Augmented Reality comes from the use of the video feed from the on board camera, a set of overlays on the user interface, and the ability to interact with the environment – especially another AR Drone. Two or more AR.Drone operators can participate in "in-air battles" in the same virtual airspace, each user seeing real flight in real space, and virtual shots fired and scored on the tablet user interface.

Navigating the device from a smartphone or tablet can make use of one of two main modes. In the classic "relative mode" the pilot needs to think of his position as if flying on the device. Thus, if the device was crossing in front of you and flying to your right, "forward" would take it farther to your right. In the new "absolute mode" of flight, the controls from an iOS device allow the AR.Drone to be moved in the absolute direction you tilt the iOS control, no matter which way the AR is facing. So tilting an iPad acting as controller back toward you moves the device in that absolute direction. That "absolute" flight approach is a little more complicated for the software, but probably more intuitive for new flyers.
Is the Parrot AR.Drone a toy, or is it the beginning of something larger and more interesting? Can you see yourself spending a little over $200 to own one?
Please leave a comment and let us know what you think!


Thanks for reading! A blog works best with active participation. If you enjoy this blog, please +1 it and leave a comment. Share it on Twitter, Google+ or Facebook. More readers will drive more discussion.
Posted by Deke Kassabian at 4:29 AM