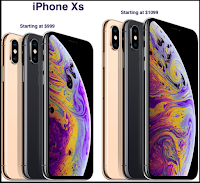 Back on September 12th, Apple announced new iPhones. Legions of the faithful, me included, shrugged off the $1000+ price tags and placed orders two days later, receiving them a week after that. As in recent years past, the new iPhone are the best ever produced. They have beautiful screens, faster processors, better cameras, and more storage than ever before. I’m very happy with my new phone, which is an iPhone Xs Max. Still, I recognize that just as in years past, the prices of new iPhones climbed to new heights.

High-end Android phones from Samsung and other phone-makers are similarly climbing in price every year, and its worth noting that a $1000+ smartphone is clearly not for everyone. There are plenty of people who cannot afford such a phone or who simply choose not to pay that price. There are great phones available at lower prices and there will always be a market for them.

For those who are willing to pay more than $1000 for a smartphone, is there a hard limit - a price so high we wouldn’t pay it? The high-end Samsung and Apple phones go up by a small amount every year and we get used to the ever higher prices, but will the price rise to a level at which sales fall off? And if so, would a company like Apple care? Apple makes and sells luxury products. If their margin increases by enough, maybe they would embrace a situation in which fewer units were sold but revenue doesn't suffer.

What about us as consumers? Is there something we want in return for higher prices?

I'm beginning to wonder whether expected lifetime is that something. What if as the price went up, the expected lifetime went up, too? What if today’s $1000 phone lasted longer than yesterday’s $700 phone, and continued to be reasonably fast with a battery that continued to hold a charge for nearly as long as it did when it was new? Would that be worth the ever-higher price? We should keep in mind that longer-lasting phones not only stretch our investment over a longer time, but also could help us to reduce the rates at which we deplete precious resources, since smartphones typically contain gold, silver, platinum, palladium and other metals. Longer lasting phones also mean reduced pressure on landfills, since we know that not all smartphones get recycled or reused.

If prices continue to go up in years to come, should we expect (should we demand) a longer lasting smartphone? What would be a reasonable price point for a phone that held up well for 3 or 4 years rather than 2 years, which is typical today? Would you pay $2500 for a smartphone that lasted for 4 or even 5 years? Some of us spend that kind of money on a high-end laptop computer and expect it to last about that long, and most of us depend upon our smartphones easily as much as our laptops.

What's your expectation of price and lifetime for smartphones as you think about the future? Please leave a comment and let us know what you are thinking.


Thanks for reading! A blog works best with active participation. If you enjoy this blog, please +1 it and leave a comment. Share it on your favorite social network. More readers will drive more discussion.
Posted by Deke Kassabian at 6:17 PM 4 comments: