Or maybe it should be

Democrats and Republicans can probably agree on this: voter participation and turnout in the U.S. is never as high as we wish. A very significant percentage of voting-age Americans just don't vote.

Another voting-related problem for the U.S. is that not everyone is well-educated about the issues that make up the substance of the debate between major candidates. In some cases they may not even have a clear understanding of how government works.

If more of us were informed on the issues, the politicians and the media might not get away with sound-bites and attack ads quite as easily. Politicians would have to raise their game and speak to the issues. The media might recognize that we want substance, and would hold politicians to a higher standard during interviews and debates, calling for clear answers to the questions asked.

We the people deserve at least that much.

Perhaps we should provide some modest incentives toward getting us there. What if each state had a $250,000 lottery on election day? Each citizen who votes can choose to take a short (4 or 5 question) multiple choice quiz on the basics of civics as taught in 6th or 7th grade. Basic stuff. How many branches are there of the federal government? Which of the following are the roles of congress? What is a filibuster? How long is the term of a Supreme Court Justice? How long is the term of a Senator?

Nobody would be forced to take the quiz. But if you do, your quiz gets a number and is entered into a lottery. You walk away with a matching number. Quizzes get sorted by machine reader into those that score 100% (entered in the lottery) and those that don't (not entered). One winner is selected at random, and the number is published. The holder of that number wins $250,000.

That's not a huge amount of money for a state, even in tough financial times. But it's a very nice win for a citizen. And I bet it drives both voting numbers and public civic awareness up by a lot.

Voting really already is like winning the lottery in that your participation in the political process is the baseline for participatory government. By participating, you have a voice in how your country is run. But maybe an additional incentive to both get more of the vote out and to encourage more of the population to understand the basics of our government, could be helpful. Voters can win the lottery in more ways than one. 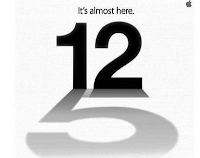 On Wednesday September 12, Apple will hold an event that everyone expects will be the announcement of a new iPhone.
The next iPhone will be slimmer, will use a new smaller dock connector, and will probably be the first to depart from the 3.5” screen used since the original iPhone. Smartphones today tend to have larger screens – the better to view video, and the better to provide underlying real estate for 4G carrier network chip-sets. And more battery. A 4” screen in a 16x9 pixel aspect ratio will lend itself well to watching content formatted for HDTV.
This iPhone will also be the first fully 4G iPhone with LTE capability.
Some of the additional speculation has been around a new processor (A5X or A6?) and whether or not the new iPhone would include Near Field Communication (NFC) hardware. I think the final decision on both will be driven by power and battery considerations. For user satisfaction, having the fastest processor is not as important as maximizing battery life. NFC hardware would likely enable some new interactive applications and some new-age commerce possibilities, and is likely to be very important to Apple’s future plans for the iPhone’s role in commerce (consider the iOS 6 Passbook application, and what it might grow into over time). But without much merchant infrastructure in place today to support NFC, I think Apple could decide to hold off another year, saving cost, power and battery. Passbook can handle coupons, boarding passes and theater tickets today, and direct financial transactions (such as credit sales) in the future once more merchants are ready and on-board. The iPhone that gets released a year from now, in 2013, could add the NFC hardware capabilities to leverage that software.
I wouldn’t complain if we saw A6 and NFC now, of course!
Though names like “iPhone 4G” or “4GS” or even “the new iPhone” (really?) have gotten some web-rumor discussion, a large shadow on the invitation in the shape of a “5” has most people speculating that the new phone will be called the iPhone 5.
Some have speculated that we’ll also hear about an iPod Touch in the same 4” slim form-factor, as well as a small-form iPad to compete with the Amazon Kindle Fire and the Google Nexus 7. I think both of those product announcements are likely, but will take place a month later in October. Why should the iPhone have to share the stage?
Summarizing my prediction: iPhone 5, new/smaller dock connector, 4G LTE, 16G/32G/64G models, 4” screen 16x9 aspect ratio, A5X processor, no NFC hardware, availability later in September.
Links: 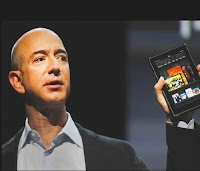 The recent success of the Google Nexus 7 – a popular new 7" Android tablet – presents a challenge for Amazon, and perhaps Apple. Amazon is expected to step up to that challenge later this week.

With the Amazon Kindle Fire now officially sold out, and an Amazon press event scheduled for September 6th, everybody knows that a new Kindle Fire is coming.

Most of the rumors agree on the obvious gadget upgrades, such as a faster processor and increased screen resolution (1280x800 likely). Inclusion of a camera seems very likely, too, and would enable personal video conferencing through Skype and similar apps. It's also expected that we'll see some improvements to the user interface and a more modern underlying Android OS, though Amazon doesn't expose the Android OS on the Kindle Fire and that's not expected to change in a new model.

Some gadget-watchers have speculated that Amazon will release both a 7" and a larger 10" tablet, the latter aimed at direct competition with the Apple iPad. Other sources, including The Verge, believe that we'll see two new versions of the 7" tablet (actual dimensions today, 7.5" x 4.7"). An entry level tablet with minimal storage, and a higher-end tablet with higher-end hardware specs.

I'm inclined to believe The Verge. Amazon has been successful with their 7" form factor and doesn't have a good reason to complicate things by taking on Apple.

Also expected to be announced is a new model of the successful Amazon Kindle e-reader with a new display technology called Paperwhite and a backlight feature that has been well-liked in recent B&N Nook models.

Whether any of the new models will have a 4G carrier networking option is still an unknown.

September and October should be interesting times for gadget hounds. Apple, Microsoft, Nokia and others will have announcements in the coming days and weeks, to announce phones and tablets for the upcoming holiday season.