Ideas, Creativity and Prior Art

Where do inventions come from? What’s at the root of innovation and creativity? Does it involve lightning bolts and divine inspiration? Do fully formed ideas pop into the heads of creative people? 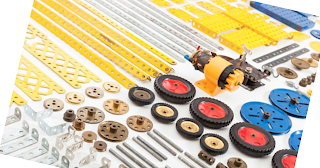 Probably, sometimes. My own experience has been less dramatic, usually involving incremental improvements and new ideas for tomorrow inspired by the things that have been successfully built for today. Thinking about this subject, a story from more than 50 years ago popped into my head.

When I was about 6 years old, my parents got me an erector set. Many people today might not be familiar with these, but they were once very popular. The set was a box full of little metal parts machined with holes the right size for a set of included bolts. Combined with the wheels and pullies and the nuts and washers, the erector set made it possible to build objects like buildings, windmills, and even vehicles like cars and helicopters.

I remember building simple shapes at first and, as a kid living close to New York City, I built little “skyscrapers.” The wheels, though, are what had me interested. I soon figured out how to build a basic car using axles and wheels attached to some basic shapes. With a few tries, the shapes started to get sportier and I soon had something like a racing car that really rolled smoothly. This was great!

When I found out that it was possible to add a battery powered motor to the erector set, I was thrilled. I convinced my parents to let me send away to the company and buy the motor. I used some birthday money and they wrote the check and addressed the envelope. Several weeks later (we didn’t have Amazon Prime in 1969), my motor arrived. It was a small yellow motor that could fit in the palm of my hand. It had a 9V battery connector and the battery would drive a rotational drive shaft that could, when controlled with a 3-position switch, spin forward or reverse or that could be set in neutral, not spinning.

In my first attempt, I secured the motor to a car I had already built, put it on the floor, and was disappointed when the car didn’t drive away. I had done nothing to transfer energy from motor to car. As my 6-year-old self pondered this, I looked at a picture in the materials that came with the set and saw a motor connected to a windmill and immediately understood the idea. I needed to use the motor to turn another piece of hardware that could drive a belt (a rubber band) that could attach to another piece of hardware attached to the wheel. This was the concept being used on the windmill and I could translate the idea to a car. This was exciting! Within minutes I had a motorized car moving across the floor, having learned how to solve my challenge by studying a similar example and learning from it.

Echoes of my experience came up often over the years. I watched as good programmers studied the code of others, and adapted ideas originally used to solve one problem in order to solve a different one. Good musicians talked about their influences, having listened to the way a favorite guitar player or singer chose to play through the music and then integrating some of those choices into their own style.

The biggest example of all may be in the science disciplines. Science values prior art so much that a big part of the way that peer-reviewed journal papers are assessed is by looking at the quality and quantity of relevant references, as these are a sign that the existing body of knowledge has been considered in communicating something new.

There is a difference between on the one hand inspiration from prior art, and referencing the strong works of others, and on the other hand theft and plagiarism. Knowing the difference is very important, but failing to leverage and respect what went before is like intentionally leaving much of your toolkit at home every day.

There’s no one answer to the questions I asked at the top, of course, but in my experience the concept of prior art looms large in a very broad range of creative pursuits.

How do you think about creativity, innovation, and associated concepts? How have you created in your own life? Please leave a comment and let us know.

Posted by Deke Kassabian at 6:27 AM No comments: