Last weekend I got the chance to go fishing in one of the most amazing spots in the world – Cabo San Lucas, Mexico. In this blog post I’ll share a description along with some photos and video clips.
The opportunity came along because my wife Tacey had business in San Jose Del Cabo, a short distance east of Cabo San Lucas. She and her co-workers were there earlier in the week and while most headed home after business concluded, Tacey and a few others stayed on for a few days along with their partners to enjoy the location. I flew in late in the week as their business was ending. We stayed for a few days in a beautiful beachfront all-inclusive resort, and would fish on Saturday.

I’m a planner and if I know I’ll be visiting a place where the fishing can be good, I’ll research the seasonal fishing opportunities and the boats that ply the trade. I’ll call and ask questions, and make specific arrangements, and that’s what I had done here. After some research back in August, I ended up booking with Kingfish Cabo and they did a great job for us. We chartered a 40’ Riviera sportfishing boat with an experienced captain and crew.

Originally, the plan was for Tacey and I to fish alone, but since two of her coworkers were still in the area and wanted to fish, and since a sportfishing charter like this can handle up to 6, we made it a group. Tacey and I were joined by two other couples – Ric and Lorraine, and Chris and Rachel. Early on Saturday, we all took the 30-minute Uber ride down to Cabo San Lucas to board a fishing boat I had chartered two months earlier.

The boat, Los Compadres, was in great condition and was well equipped, as advertised. It had a full crew including captain Carlos, who had 25 years of local fishing experience, and a crew that included two mates, Juan and Victor, on deck. Having one mate is typical but they explained that when trolling a full pattern of lures and baits, clearing lines after a strike was best handled by two mates. In these situations on other charters, I’ve helped to clear lines but I certainly didn’t object to the extra hands.

A final crew member, Ventura, was our private chef. He had coffee, fruit, and pastry for us as we arrived at 7am, and when lunchtime rolled around he had prepared two kinds of fresh ceviche and three kinds of tacos for us all, and even some sashimi at the end of the trip. The charter also provided a big cooler full of local beers like Tecate, Pacifico, and Corona, as well as plenty of water. Back in the galley, Ventura had Tequila for us so that we could drink Margaritas as we headed back to port in the afternoon. 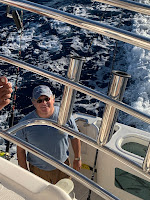 The main story, though, is about the fishing. This is a great time of year to fish in Cabo as many coveted gamefish are around and close to shore. Throughout the previous week, a major Blue Marlin tournament was underway and as a result all the pros in the area were well informed about what was biting and where either because they fished in the tournament or spoke to those who did. I had originally expressed an interest in fishing for Wahoo (a tasty gamefish I have yet to catch) and our crew said they’d look for them, but also said that we were likely to encounter Striped Marlin. That sounded good to me. I’d caught Sailfish and Pacific Spearfish before, and I’d been on boats where others landed Striped Marlin, but I hadn’t caught one yet. I should mention that while wahoo is a fish kept for food, marlin of all kinds are revived and released after a few photos.

The boat got underway just after 7am, and our gang of six decided to ride up in the fly bridge. As we cleared the marina our first stop was at the local bait boats where the mate bought some mackerel for the live-well and some ballyhoo to be rigged. From there we proceeded out to open water and watched a beautiful sunrise as we rounded the famous Cabo Arch area. From there, Los Compadres and several other sport fishing boats throttled up for the run to the fishing grounds. After only about 25 minutes ride to the northwest, never more than a few miles from shore, we were ready to fish. The mates lowered the outriggers and got a pattern of 8 lines out to troll, with a mix of lures and baits. 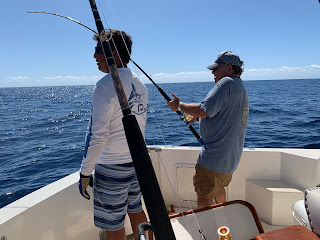 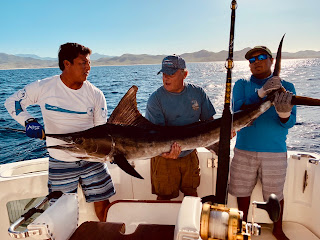 The first strike came after about 40 minutes. The group quickly encouraged me to take it, so I grabbed the rod and hopped into the fighting chair. The mates told us it was a striped marlin as I started the fight. Early on the fish took line faster than I got line back, but after 25 minutes and three runs, the fish was alongside. We hauled it in and got some photos and took a measure, and then let it free to fight another day. The marlin was a beauty, at 92” in length. 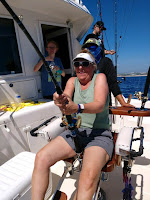 Over the next three hours, we landed two more. Ric caught one of similar size and his did some beautiful tail dancing during the fight. Chris fought one that got off the hook, and then later landed one of about 96”. Each fight was 20-30 minutes and featured some great jumps and many exciting photos and video clips. We revived both fish carefully and sent them on their way after some photos. We then dug into the ceviche and tacos, as well as the beer, while the boat trolled some lines on a long run back towards home port. After a while, though, the captain up in the fly bridge saw some serious fish activity in the distance and we pulled all the lines in and ran flat out to get in on it. Once there, the fish hit the lines right away. Tacey decided to get in on the fun and took a rod to the fighting chair, and a moment later a second hookup happened and I took the rod. With the chair occupied, I needed to fight the fish standing up which was extra hard but extra fun. A third fish raced past the stern and picked up one of our baits, but dropped it quickly. For the next half hour, Tacey and I fought the two striped marlin at once. They dove down deep, they peeled off line, the jumped, and we got back line when we could. In the end, she landed a 96” fish and I got the biggest marlin of the day at 104”. Again, photos and measurements and high fives all around, and then release.

It was finally time to head in, and we drank beers and margaritas and relived our catches. We took pictures with the crew and again saw the Cabo Arch. As we approached the marina we ran up the capture flags. As they went up we were surprised to see sea lions following behind us. The mates weren’t surprised though. The sea lions apparently do this every day. They hopped up one at a time on the boat’s stern swim platform and looking every bit like a friendly dog, begged for fish. We tossed them mackerel, which they ate, and ballyhoo, which they didn’t.

The boat arrived at its slip in the marina and after a few more photos with the crew we said our goodbyes. It was a great day and though we were exhausted, we hiked a few blocks through Cabo … to get a little food and drink at Cabo Wabo, the famous Sammy Haggar cantina.

I can only say that it was a magical day fishing. The boat and crew were great, the ride was smooth, the scenery was amazing, and the fish were biting. So many fishing days don’t work out, but we fish knowing that once in a great while, a perfect day like this one comes together. The trick is to know how lucky you are when it does.


Thanks for reading! A blog works best with active participation. If you enjoy this blog, leave a comment, and share it on your favorite social network. More readers will drive more discussion.

Posted by Deke Kassabian at 7:19 PM No comments: