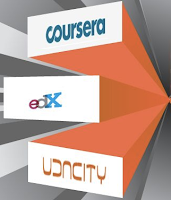 Those who know that I'm in grad school sometimes ask what my research is about. I mumble something about MOOCs, but I really haven't always had an easy (or brief) way to answer. When I formally proposed my research to my committee early in June, I did it with a 50 page paper, an 8 minute prepared statement, and 40 minutes of answering their questions. My 50 page paper wouldn't make a very good blog post, but an edit of my prepared remarks might help to describe what I'm researching. I'll give that a try here.

Massive Open Online Courses (MOOCs) have drawn a great deal of attention in the last two years. One reason for that is that people are interested in seeing whether MOOCs can help with some of higher education’s greatest challenges, including
1.     Access
2.     Costs
3.     Rate of, and time to completion

·      Access, because MOOCs can reach users worldwide through the Internet, and can serve tens of thousands of students at once, regardless of where they are.
·      Costs, because while MOOCs today are often expensive to produce, they generally do not involve any cost to those who take them.
·      Completion, because MOOCs will probably play a role in remediation in the short term, and may increasingly be able to be taken for credit in the longer term.

Another reason that MOOCs have drawn attention is that the set of universities most visibly involved are the elite U.S. universities who generally have engaged in online education in only limited ways until now. When Harvard, Stanford, Princeton and Penn make major moves into online education, the higher education community takes notice.

Enthusiasm for MOOCs in these early days is high, but so is MOOC skepticism. Past large scale online education efforts such as Columbia’s Fathom have failed so it is reasonable to wonder whether MOOCs will turn out to be merely a higher education fad that will eventually fade away.

In addition to skepticism, there are concerns. Some college leaders, especially those at less well funded institutions that have not been early adopters, have expressed concerns about the impact of MOOCs on their business model. With MOOCs being produced at some of the top ranked universities in the world, they are concerned that their business model is at risk. When their own students take Poetry from Penn, Circuits from MIT, and Justice from Harvard, all at no charge, how will that affect their perceptions of cost and value at their home institution when they return to class the next semester? Will they expect education to be free, taught by celebrity faculty, available on their schedule, and in convenient 15 minute segments complete with nifty graphics? There may be valid reason for concern.

Since 2012, more than 80 elite U.S. and international universities have developed and distributed course content in the MOOC format, but their motivations are not yet entirely clear.  This leads directly to my research questions regarding these early adopters.

1.     First, What are they trying to achieve?
2.     Next, How will they assess success?
3.     And finally, what business model or value proposition are they planning?

Interest in these questions is high. Versions of my study questions can be seen frequently in higher education and popular press headlines, and heard in discussion among faculty and educational technology staff. Conferences in academic and IT circles increasingly have topics and tracks that address MOOCs and their role. I believe that these research questions are of significant interest to many within the higher education community.
The literature on MOOCs so far includes a substantial and growing amount of research on learning theory as it applies to MOOCs. Some have studied learning outcomes in online education since well before the days of MOOCs. Others have studied some of the unique attributes of MOOCs (such as their massive nature, their use of social network concepts to promote interaction, etc.) and how they can be used well to foster good learning outcomes. Little or no research has been published on MOOC decision process, however. This is not surprising, given how new the phenomenon is.
To attempt to answer my three research questions, I propose a qualitative, multiple site holistic case study to investigate and analyze the goals, motivations and decision processes at elite, early-adopter U.S. universities as they consider investments in, and possible future roles of, MOOCs at their institutions. Interviews with individual faculty members involved in planning or teaching in the MOOC format as well as with faculty members who are willing to share concerns and skepticism about MOOCs, will be performed. In addition to faculty, others will be interviewed including educational technologists who help to prepare MOOCs, and students who have taken MOOCs or have helped as teaching assistants. Finally, and most importantly, I will interview key decision makers such as chief academic officers and faculty advisors on MOOCs. I will also study related documents at each study site, looking for documentary evidence that helps to answer the three research questions.
Inductive data analysis approaches will be applied to the interview transcriptions and collected documents, and then patterns and themes in the data will be noted and analyzed. An effort will also be made to collect data representing multiple perspectives. For instance, minutes from a faculty meeting in which objections were raised would help to provide balance and avoid the “echo chamber” effect that could occur when interviewing only those who have committed to the stated university direction on MOOCs. Strong patterns found at study sites will be considered for their contribution to that site’s plans and decisions regarding the role of MOOCs. Looking across the three studied sites, common patterns and stark contrasts will also be noted.
I was able to perform a pilot study at Penn, which was very helpful in fine tuning my research protocol and practicing the process of writing up findings and performing analysis. Penn was a rich site in that it was a very early adopter and a prolific creator of MOOC content. Since then, Several good study sites have been identified, and contacts at several of them have been showing signs of support.
(Candidate sites not named here until arrangements are finalized)

In conclusion, I propose to study the goals, assessment and decision processes, and business models at at three elite early adopters of MOOCs. I plan to use a multiple site holistic case study approach relying on interviews and documents as evidence. I believe that my research questions are not yet well studied, but are of broad interest and therefore worthy of investigation.

Thanks for reading! A blog works best with active participation. If you enjoy this blog, please give it a +1 and leave a comment. Share it on Twitter, Google+, or Facebook. More readers will drive more discussion.
Posted by Deke Kassabian at 7:13 PM 9 comments: