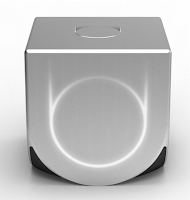 I'm not much of a game system guy, so I don't tend to blog about gaming. But this one has me paying attention.

As of July 12th, after only a few days on Kickstarter, the Ouya game console folks have raised $4 million. Ouya had initially set out to raise $950,000. They got that much in less than a day.

Makes me wonder... how does a small company change it's plans when it gets at least four times the working capital it asks for?

Every time a kickstarter project raises a lot of money, people begin to wonder whether we are seeing a scam in the making. After all, Kickstarter projects come with no guarantees. I admit that this could be a scam, but I'm betting it isn't. The premise is very reasonable: Low cost hardware to run a mature operating system as part of a more open and accessible (when compared with Roku, AppleTV or Google TV, or other devices hooked to your HDTV) home entertainment experience.

Details
Ouya will be an Android-based game console that can output 1080p HD video. It's planned to have 8 GB of storage, 1 GB of RAM, and will sell for $99 with a planned release in March 2013

Would a true Android OS under the covers mean that this device could provide a bridge from the huge library of Android phone and tablet apps to your living room television set? If so, not only could this be a great way to play games but it could bring a long list of quirky, creative, fun apps to a big screen for a shared experience.

Is it real? Will they be able to bring it to market for $99 in less than a year? If they do, will the games be there? I don't know, but I'm rooting for them.

Thanks for reading! Blogs work best with active participation. If you enjoy this blog, please give it a +1 and leave a comment. Share it on Twitter, Google+ or Facebook. More readers will drive more discussion.
Posted by Deke Kassabian at 5:40 PM