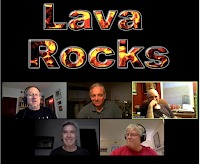 The age of the COVID-19 pandemic has changed so much about how we live our lives. Every one of us can describe the impact on our employment, ability to see family and friends, to travel, and even to get groceries. Sadly, some of us have been sick or have been taking care of those who are, and some have lost loved ones. We are living through a time unlike any in living memory.

One smaller but important impact of the pandemic is the loss of live entertainment. Broadway has gone dark, major musical acts have canceled their tours, and little hometown rock and roll bands like mine, The Lava Rocks, have abruptly halted gigging in the local bars.

The Lava Rocks are a classic rock cover band who started gigging in 2019 and by early 2020 had started to play steadily once or twice a month. Our March 7th gig was our last for a while, though, and we’ve missed a number of planned dates since. We have shows on our calendar through the rest of 2020 but don’t hold high hopes of playing many or even any of them under the circumstances.

In order to remain connected with each other, and to continue to have a musical outlet, we have done what many musicians have done - we’ve turned to the web. We looked back at some rough video we had of recent shows in the local bars (The Mermaid Inn, The Grape Room, The Red Stallion) and picked out some that suited our purposes, which means the audio and video had to show a complete song, be focused reasonably on the stage, with the stage reasonably well lit, and with reasonable quality audio. It was surprising how much of the video these basic criteria eliminated! But with a few clips picked out, we produced some “web shows” in which we made a few introductory remarks on camera and showed these videos. They can be found on our web site at the CONCERTS link (https://www.TheLavaRocks.com/concert/). We hope you’ll go check them out if you haven’t already seen them.

After releasing web shows on April 18th and May 16th, which were great fun for us to put together, we found that we’d used up most of the audio/video material that meets the criteria above, so we decided we needed to begin to create new content.

The obvious approach turns out to be completely unworkable. People everywhere are spending lots of time on video collaboration applications like Zoom, so it seems like playing music together, separately, should be doable by joining a Zoom session and just playing as though all are in the same physical room. As anyone who has tried to sing Happy Birthday in a crowd assembled on Zoom has quickly found out, this doesn’t work well at all! The reason is that small variations in delay from each participating camera to the Zoom servers and then back to the other participants (an effect known as “jitter” to network engineers) makes it impossible to properly synchronize.

The Lava Rocks spent some time considering a few popular apps for recording piecemeal, one at a time, and handing off to the next person. None were quite what we wanted, and some made it hard for us to maintain complete control over the content. In the end we decided that a very simple approach might work best for us, using home recording computer applications such as Garage Band and Pro Tools.

We begin by deciding on the tempo of the piece we want to record. Sometimes we lock this tempo in to match the original album recording of the song, sometimes we intentionally choose something a little slower or faster for our purposes. We then create a “click track” in the recording application, which is a simple click or drum beat at the tempo we selected. We export that simple track as a very basic quality audio file (usually an MP3) and distribute to all band members. The band members then listen to that click track on headphones while recording their part(s) on their computer or even their smartphone, trying to get the best quality audio they can with the least noise. They capture that as a sound file and send that sound file back to the band member engineering the song, who drops it into Pro Tools or Garage Band and aligns them. The tempo will already match because of the click track. The click track is then thrown away and the levels are adjusted for each track. A rough mix of the music is done and exported as a sound file, allowing the vocalist(s) to record their parts while listening to the audio in headphones. Now with the vocals, a re-mix of all tracks is done along with the addition of a little reverb to get a final product. This whole process takes about 2 weeks and about 3 hours of time on the part of the band member engineering the final product.

Once we have a complete and final song recording, we can release the audio. We know that for the web, though, a video is also desirable. With that in mind, we are recording video clips of us recording the audio at home and using the combined audio and video to create something like a music video.

This whole process takes a lot of work, and we are learning as we go. We hope to share some of our work product with all of you in the coming weeks. We hope you’ll give our songs and video a look and listen, and invite you to let us know what you think of the results. In the end, though, we’ve already achieved something really important to us – we’ve stayed connected as a band and continued to play music together, separately.

Thanks for reading! A blog works best with active participation. If you enjoy this blog, leave a comment, and share it on your favorite social network. More readers will drive more discussion.
Posted by Deke Kassabian at 1:11 PM No comments: