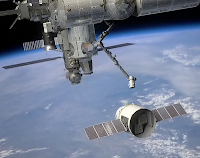 I grew up reading about NASA's Mercury and Gemini programs, and watching Apollo missions as covered on television. I literally sat at my father's knee and watched NASA land men on the moon in 1969 with the Apollo 11 mission. Later, the NASA Space Shuttle program took astronauts into space and brought them back without a capsule splashdown - they landed on a runway like a commercial jet. For decades, NASA was the world leader in space travel.

Times are changing. NASA's budgets are shrinking, and the Space Shuttle program has now come to an end. Private enterprise is taking up at least some of the slack. An incredible private company called SpaceX (short for Space Exploration Technologies Corp) sent their Dragon capsule to dock with the International Space Station this past weekend in a show of technological prowess that only government programs (the USA, Russia, Japan and the European Space Agency) had achieved before.


In 2008, SpaceX won the NASA contract to replace the cargo transport function of the Space Shuttle with their Falcon 9 and Dragon vehicles. With a practical success now under their belt, astronaut transport is next. SpaceX seems well positioned to fill that role.

SpaceX also just won a contract to launch a communication satellite for Intelsat, a Washington DC based provider of communications services for media companies, ISPs, government agencies and corporations.


Elon Musk is the CEO of SpaceX and also CEO of Tesla Motors, makers of the all electric Tesla Roadster. He's also chairman of SolarCity, a provider of solar power systems in California. Prior to SpaceX, Musk co-founded PayPal.


Will space travel increasingly be the domain of private enterprise? What's the future of government operated programs like NASA? Please leave a comment and let us know what you think.


Thanks for reading! Blogs work best with active participation. If you enjoy this blog, please give it a +1 and leave a comment. Share it on Twitter, Google+, or Facebook. More readers will drive more discussion.
Posted by Deke Kassabian at 5:24 AM