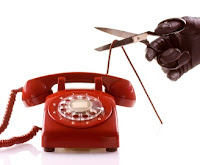 Ever hear Verizon, Comcast or Cablevision talk about “the triple play?” They want to sell you Phone, Cable TV and Internet services for your home as a package. They get more business, you get a combined bill. Everybody wins. In reality, of course, this is an approach that telephone companies and cable television companies, previously in separate businesses, use to fight each other for the same services to the same customers.

Some consumers prefer not to keep all three services, though. Those people are cord cutters.

Voice on the Internet

Many have figured out that the traditional landline telephone service may not be the necessity it once was. Some will gladly use their mobile phones when at home if they have strong signal and a carrier plan with plenty of minutes to use. Others replace home landline service with Internet based services like Skype (now owned by Microsoft). Skype allows users to communicate over the Internet to other computers for free, and to telephones for very competitive rates. For those who still want a standard telephone handset, there are services like Vonage and Magic Jack, both of which leverage the broadband Internet connection in a home but preserve the standard telephone handset experience.

Replacing your Cable TV service by leveraging your Internet connection is a little less straightforward but not because the technology is unavailable. Ask anyone who watches Netflix, or Hulu Plus. Great content can be sent over the Internet to your computer or your television. These services are simple and effective. But unlike voice communications, where the "content" is the voices of the two communicating parties, the content for television is tightly controlled. Controlled by movie studios, television program production and distribution companies, and cable television companies like Comcast and Cablevision. These companies have a complex ecosystem of content creation and distribution, and a well understood income model. To avoid breaking that ecosystem and risking their income, pressures are being applied at various points to prevent Netflix, Hulu and the like from having access to the broadest range of quality content. Not out of a fear that content will be stolen (although that's probably a concern as well), but out of a fear that all the business arrangements would need to be renegotiated, that there would be unexpected winners and losers, and that overall revenue would go way down.

Cable and satellite TV services are another matter. They could just as easily disappear and be subsumed by video entertainment services over the Internet. All the same content could be sent over the Internet, and monitization models exist already. Hulu Plus, Netflix, and iTunes are examples. But entrenched business models that work well for everyone in the supply chain (though not for the consumer) won't give way so easily.

The lesson of the music industry, though, is that it really might not be possible to hold onto traditional business models when the public wants a change. If people want to access television and movie content over the Internet to watch on their computers, smartphones and tablets, if they want unbundling of television channels and the ability to buy shows or series or channels in an a la carte way – and they are willing to pay – the industry is better served by figuring out how to change than by how to hang on to the past.

How long until a fast and reliable Internet connection allows for consumers to make arrangements for voice and video services in the combinations and forms they wish?

Do you have an opinion on this? Please leave a comment and let us know your thoughts.

If you enjoy this blog, please +1 it below, share it on Facebook, Google+ or Twitter, or suggest it to your friends.  More readers will drive more discussion. Thanks!
Posted by Deke Kassabian at 4:49 AM