The Next Leap In Maps? 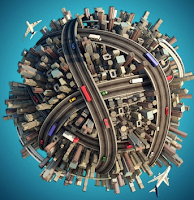 We all used Mapquest until we used Yahoo! Maps and then Google Maps. Google Earth let us fly through our favorite locations. Smart phones started doubling as GPS devices. Satellite imagery was superimposed onto conventional maps, making our maps hyper-realistic. Over a few short years, our ability to work with map data grew by leaps and bounds. We can now find efficient routes, explore new locations before we arrive, and take fantasy trips on our screens that we might never take in real life.

Two of the biggest players in this space are Google and Apple. Google Maps and Google Earth are incredible tools. And Apple has brought maps to the hands of millions on iPhones and iPads. But as Apple and Google find themselves in competitive situations over time, their existing business relationships change. The two companies continue to inch away from eachother, more comfortable going it alone than providing revenue to the other. It now seems clear that "maps" is the next place in which that will happen.

It's been known for some time that Apple would soon be moving away from using Google Maps on iOS devices. Apple has acquired mapping companies with 3D capabilities, including Poly9 and C3 Technologies.

With WWDC just days away, Google, too, knew that a set of Apple iOS announcements would focus in part on maps. Apple is moving away from Google, so Google made a move of their own, announcing a press event for June 6th – mere days before Apple's event.

It's widely believed that both will bring several new capabilities to their map software. Perhaps Apple will announce turn-by-turn voice prompts on iOS devices. But what most people expect is that both companies will show off 3D rendering of maps in a very eye-pleasing user interface.

It seems quite possible that June 2012 will be remembered as a point in time when very good map software took a big leap forward and became great.

What is it that you want most from your desktop or smartphone map application that it cannot do today? Would a beautiful 3D appearance be a winner for you?

Thanks for reading! Blogs work best with active participation. If you enjoy this blog, please give it a +1 and leave a comment. Share it on Twitter, Google+, or Facebook. More readers will drive more discussion.
Posted by Deke Kassabian at 5:00 AM