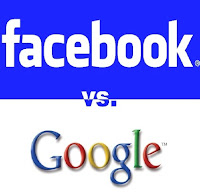 Can we agree that it would be good for Facebook to have some competition?
Competition is often healthy, driving innovation (an area where Facebook may not need help) but also in creating pressure on an otherwise dominant vendor (more relevant for Facebook). We may be uneasy with some of Facebook’s quirks and its handling of our privacy, but we have no real alternative. Sure, there’s up-start start-up Diaspora who is rethinking the friend and group concept, but their progress is almost as slow as their servers. Diaspora is only in “alpha” but it really is unusable.
In 2010, Google introduced Buzz as a way of having status messages and conversation elements linked together within the Google email interface. Interesting, but there were some privacy concerns and concerns over the direct linkage with email, and the idea didn’t seem to catch fire. More than a year later, while technically still alive, Buzz is pretty clearly not getting large market share.  I think Buzz is all but dead.
Google does many things well, but not every effort of theirs comes out a winner. Buzz, Wave, even Google Voice are all really interesting ideas, even fairly well executed, but with these services Google didn’t tap into the magic that makes an online service catch fire with the huge community of users already using Gmail or Google Apps, let alone Search in which they are the dominant player.
Back in May, the tech community was talking about the likely Google entry in the short list of challengers to Facebook. This week, Google jumped in with Google+. The official google blog describes it thoroughly and includes video clips. A limited beta is in progress. My friend Chris Mustazza has early access, and blogged about his first impressions.
The starting point is that as a user you create groups (called Circles), and then can interact with your online friends by selecting the relevant Circle for any communication or activity. That seems to me to be addressing one of Facebook’s biggest downsides. It should be noted that Diaspora also targeted this aspect of the friend relationship. It seems clear that lots of people think that Facebook has this wrong, that their group concept is weak, and that friends are not one-size-fits-all.
Building on Circles, Google+ includes text chats (called Huddles) mult-party video chats (called Hangouts), some nice ways to handle photos, and more.
Does Google have a good chance with Google+ at drawing in some of the 750 Million Facebook users? Or is Google+ the next Buzz - functional but unable to generate excitement?
Please post your comments here.
Links:

If you enjoy this blog, please +1 it below, share it on Facebook or Twitter, or suggest it to your friends .  More readers will drive more discussion.
Posted by Deke Kassabian at 5:24 AM