(I promised to cover a few items getting buzz at the Consumer Electronics Show held last week in Las Vegas. This piece is the fourth and final in that series) 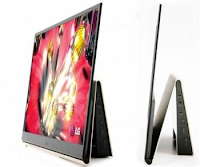 Though I'm not a huge TV aficionado myself (the only TV I can see from where I'm sitting at the moment is a 13 year old standard def TV!), television can be really big at the Consumer Electronics Show. This year it was big and thin. 55 inches may be far from the largest of television sets available, but there was something special about what was being shown by two well known manufacturers.


LG was first, showing their highly anticipated 55-inch OLED TV at CES 2012. The picture on the 55EM9800, by report of all who saw it in person, is astounding. Bright colors, high contrast, great viewing angles, high performance for fast changing display, all in a sleek and manageable (about 17 lbs.) ultra-thin (4mm at its thinnest point) package. The 55EM9800 can handle 3D and makes use of current LG 3D glasses. Prices haven't been announced, but industry insiders have estimated between $8,000 and $10,000 as an initial price.
Samsung followed soon after with an announcement at CES 2012 of their own 55-inch OLED television, set for release in the second half of 2012.
Is a television set of this highest quality a priority for you? Would you pay top dollar for such a display?  Please leave a comment and let us know what you think!

Thanks for reading! A blog works best with active participation. If you enjoy this blog, please +1 it and leave a comment. Share it on Twitter, Google+ or Facebook. More readers will drive more discussion.
Posted by Deke Kassabian at 5:27 AM