And then there were three? 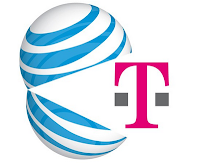 In the US, the four largest cell phone carriers in order of size (both customer count and revenue) are Verizon Wireless, AT&T, Sprint and T-Mobile. Together they account for a little more than 90% of the US market.
Back in March 2011, AT&T announced its intent to acquire T-Mobile. The combined company would be larger than Verizon, and so would take over the number one spot. And consumers would be down to three practical choices when it comes to national-scale carrier networks. That was the theory, anyway; it has not been smooth sailing for the proposed merger since.
A detailed timeline is long (and boring), but here are the highlights:

Though AT&T now will propose a variety of asset sales to get regulators to view the merger more favorably, tAT&T will have to pay a charge of $4 billion dollars in the fourth quarter of this year to pay a "breakup fee" it owes Deutsche Telekom (T-Mobile's parent company) if the deal falls apart.
If only that $4 billion had been spent on AT&T network upgrades! More data and voice capacity, and a quicker 4G upgrade would benefit AT&T customers in a real and direct way, and would help to push Verizon and the other carriers to upgrade more quickly.
I can't say whether T-Mobile is viable long term without AT&T. A sale to AT&T now was probably a very good option for them. There might be other suitors, including cable companies like Comcast or perhaps other big players interested in the carrier space, such as Google.

It would have been better if AT&T didn't attempt this merger but now having done so, I think I'm hoping that they somehow succeed. I'm usually against consolidation that limits user choice, but this case might be different. With the merger AT&T would get some good spectrum and put it to good use to benefit consumers. Without the merger, they'll pay the $4B to Deutsche Telekom and probably delay the needed network upgrades, while T-Mobile could continue to shrink and slowly become less relevant as market competition for AT&T and Verizon.


Do you agree? Please share your opinion in the comments below!
Links:
Thanks for reading!  If you enjoy this blog, please +1 it below, share it on Facebook, Google+ or Twitter, or suggest it to your friends .  More readers will drive more discussion.
Posted by Deke Kassabian at 5:00 AM