Steve Jobs has had an amazing career. Apple, Pixar, NeXT, Apple. Eric Schmidt recently called Jobs the best CEO in the last 50 years. It’s hard to argue with that. 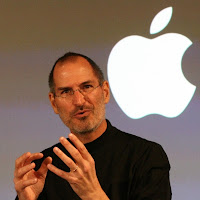 Jobs not only co-founded Apple, he brought the company back from death’s door – where Apple found themselves after a few years of Gil Amelio leadership in the mid 1990s.  Jobs did more than just turn Apple around, he turned Apple into arguably the most influential and important technology company in existence today. Only Google and Facebook are even in the same league. Amazon may be close. Microsoft no longer is.
But Jobs did more than just lead a tech company successfully. He reshaped industries. Jobs convinced record companies and movie companies to take the leaps to digital distribution that they were afraid to take until that moment. You think the move to digital media was inevitable? Maybe. But it didn’t actually happen in a big way until Jobs put the pieces (iPods, iPhones, iTunes) together in a way that worked for consumers and forced industries to adjust. He knew we needed not just the right devices, but the content to go on them. Will someone other than Steve Jobs at Apple be able to make that sort of sea change happen again?
When Jobs stepped down at the end of August, people began to wonder what would become of Apple.  Could the company remain as vibrant without him?
One thing gives me hope. Make that three things: Cook, Ive, and Schiller.  Jobs assembled a very strong senior management team and infused that team with his perspective and winning approaches.
Tim Cook as the new CEO by all accounts brings exceptional business and logistics skill.  He’s been with Apple for over 10 years and has run the company in the past with skill and clear success.
Jony Ive has been the primary industrial design leader at Apple, and a favorite of Steve Jobs, these past few years. His designs make key Apple products like the iPhone and the iPad what they are.
Phil Schiller knows how to market Apple in a way that consistently keeps Apple’s products – which are never the least expensive – at the top of people’s lists. If you’ve ever seen an iPhone or iPad advertisement, you know what I mean.
The Apple product pipeline is well stocked with upcoming iPhones, iPads and more, and those products already have the Steve Jobs influence. But I have a good feeling about Apple’s future if the likes of Cook, Ive and Schiller stay on board and work well together.
Next week I’ll speculate on the upcoming iPhone 5, including release dates and features.
Links:
If you enjoy this blog, please +1 it below, share it on Facebook, Google+ or Twitter, or suggest it to your friends.  More readers will drive more discussion. Thanks!
Posted by Deke Kassabian at 3:58 AM