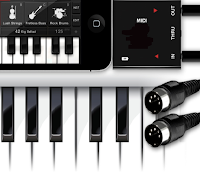 Back in the early 1980s, a technology came along that allowed electronic musical instruments and effects processors to communicate via digital messaging. As a keyboard player in rock bands and computer enthusiast at the time, this was right up my alley! It allowed guys like me with more than one synthesizer and a few effects processors to manage them a little more easily.

Musical Instrument Digital Interface, or "MIDI" was invented by Dave Smith of Sequential Circuits 30 years ago. MIDI is still in use today, and it's use has expanded to many other devices including computers and smartphones.

As a hobbyist item, and one which carried some real complexity, MIDI evolved with the typical support structure of the geek community - the users group. The American MIDI Users Group started up and encouraged local chapters. I founded the Rochester MIDI Users Group in upstate New York soon after. "RMUG" had about 30 members (some musicians, some electronics hobbyists), and held monthly meetings at a local Rochester recording studio. I produced a monthly newsletter that I wrote, photocopied, folded, and mailed to members. Each month at our meetings, a musician or a music store owner would demo a piece of MIDI gear and talk about it's capabilities, both from a musical standpoint and a MIDI capability perspective.

Back in the early 1980s, I was also a computer programmer. I wrote simple software to control MIDI devices from my Apple //e computer. The software could change presets for groups of instruments at the touch of a button, or send "system exclusive" messages to tune the parameters of a single device at a time. I even lectured at a local community college on the subject and taught a few students how to do similar things with their computers and MIDI gear.

Many years later, MIDI is still a part of the underpinnings of much of the equipment that musicians use. But like many good technologies, it is now transparent to most. It simply does its job and fades into the background. Lots of us are grateful that it still works so well.

Thanks for reading! A blog works best when you join in. Please post a comment, share this on your social networks, and send your friends our way.
Posted by Deke Kassabian at 9:11 AM