Coming soon to an Apple Store near you

The rumors are now coming fast and furious: the next rev of the Apple iPad is due out very soon. Signs are pointing to an early March product announcement, with availability to follow very soon after. 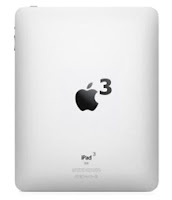 Form Factor: There's broad agreement from sources that the iPad 3 will have the same general form factor as the iPad 2 (9.5 x 7.3 inches), with the same size screen (9.7 inch display). The device may possibly be slightly thicker to accommodate a modest set of changes on the circuit board.

Display: We should see a much higher resolution display, likely 2048 x 1536 or twice the pixels in each dimension (so 4x overall). This should make for crisp images in the user interface and a true HD movie viewing experience. A display of that resolution can fairly be called a retina display in which the eye cannot pick out individual pixels.

Processor: Lately, this has been the area of greatest speculation. The iPad 2 has a dual-core A5 processor. Many Apple-watchers had been expecting a quad-core A6 processor, but some sources have very recently claimed to have a photo of the circuit board in which an A5X processor was clearly seen.

Camera: The iPad 2 cameras weren't anything special, so it's very reasonable to guess that we'll see a very significant upgrade here. Gizmodo, iLounge and other sources seem convinced that the iPad 3 will have an HD front facing camera to accommodate very high quality FaceTime. That seems like the most important camera upgrade to me. Few people want to take snapshots with the iPad, since the larger form factor is clumsy (and you have a smartphone that takes photos already, right?). The iPad is a natural for casual video conferencing, though, if a good network connection is available – and if the camera is of high enough quality.

Network: Will the iPad 3 carrier networking include 4G LTE? This is an interesting question. It's early days in terms of coverage nationwide, so the device would have to rely on 3G most of the time. But the inclusion of 4G at this point would clearly signal an intent to release a 4G iPhone in the summer. That, in turn, would signal belief on Apple's part that AT&T and Verizon 4G rollout is happening at a fast enough pace to make the decision worthwhile. This is a space to watch.

Those are my best guesses! Do you have different guesses? If the above turn out to be largely correct, is the iPad 3 on your shopping list this spring?

Please leave a comment and let us know what you think.

Thanks for reading! A blog works best with active participation. If you enjoy this blog, please give it a +1 and leave a comment. Share it on Twitter, Google+, or Facebook. More readers will drive more discussion.
Posted by Deke Kassabian at 5:35 AM