Potholes in the Information Super-Highways?
I’m at the last day of an Internet2 conference on advanced networking for higher education.  Over the years we’ve achieved some really positive things that enable university and federal laboratory research, and also that advance the general state of information technology. 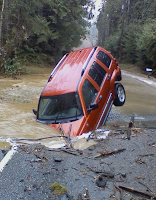 A quick review may be in order.  Initially, we developed nationwide networks that could be used as alternatives to the commercial Internet.  Borrowing the well-worn highway metaphor, these were fast, wide highways with low traffic and short cuts to everywhere.  The result was that researchers on Internet2 could do things that until then were impractical or outrageously expensive.
That work on the highways (the networks) continues, with more lanes and more destinations added all the time. More recently, though, many of us spend our time in related areas such as online security, privacy, and identity strategies and services that benefit our research community and the broader Internet.  Some of our time is spent directly on user tools, too, in areas including collaboration, video distribution and voice communications over research networks to better support our campuses.
A perennial problem for us is how to get our best advancements – on network designs, on security and identity, on user tools – out to the broader public.  It’s worth remembering that a very large portion of what we know today as the Internet came not from the commercial sector, but from universities and government funded research programs.
So, is there a good way to get commercial network service providers to take up the best of our development and make it available to their customers?  Is there a way to get them to at least provide more bandwidth to more users without large increases in prices when they may be motivated to move more slowly and maximize their profits? Google may have some influence on that one, if their experiments in Kansas City, and perhaps elsewhere, are successful.
Or instead of trying to influence commercial service providers, should our small but successful research networks and services expand to include far more users, going beyond our traditional community to include a larger and more general community across the country?
A related question is whether US communications networks should be more like the national highway system, substantially funded by the federal government.  A part of me is concerned about government regulation, but a part of me is concerned about the lack of it and the implications of unchecked practices of commercial providers who have a financial interest in the success of particular applications or entertainment channels.
What are your thoughts on these questions?  Please comment, or share this post with a friend (or both!).
Posted by Deke Kassabian at 6:30 AM